Ahead of today’s House of Commons debate on the Marriage (Same-Sex Couples) Bill and the raft of wrecking amendments tabled, for the most part, by Tory MPs, I think that it’s well worth reflecting on exactly where opposition to equal marriage is coming from and, particularly, how that opposition is being organised.

As far as public opinion is concerned, YouGov President Peter Kellner lays out the actual position with admirable clarity:

The passions of grass-roots Tories who are bitterly opposed to same-sex marriage are not shared by the wider electorate. Most voters back a change in the law – and very few opponents are willing to switch their votes because of this issue.

Overall, YouGov’s latest poll for the Sunday Times finds that 54% of Britons support ‘changing the law to allow same-sex couples to marry’. Conservative supporters are evenly divided: 45% in favour, 48% oppose.

However, as MPs gather to debate the bill on same-sex marriage, perhaps the more significant figure is that only 7% include it among the top issue that will determine their vote. We offered people a list of 15 topics and asked them to pick up to four. Same-sex marriage comes twelfth. And those who DO include it divide 58-42 in being more likely to support a party that backs a change in the law.

So, not only do a majority of the public support marriage equality but its also anything but the political hot potato that its (mostly) Tory opponents are trying to make out.

YouGov’s polling is, of course, entirely in keeping with the observations of both Chris Dillow and Mr Eugenides on the ‘swivel-eyed loons’ row:

In the row over the “mad, swivel-eyed loons” remarks, something is being missed – that, from an economists’ perspective, we’d expect political activists to be disproportionately mad.

By “mad” I do not mean the content of activists’ beliefs, but rather the intensity with which they are held; I’m thinking here of fanaticism rather than extremism. I don’t think opposition to EU membership or to gay marriage are mad. What is mad is attaching great importance to such views. As Adam Smith said, “there is a great deal of ruin in a nation.” We can live well with a lot of suboptimal policies.

But here’s the thing. Political activists are selected for passionate intensity. Stuffing envelopes and canvassing often-hostile voters is a dull and unpleasant way of passing the time. So what sort of people would volunteer to do it? The sort who over-rate the importance of politics – who believe their favoured policies will have huge pay-offs and their opponents’ will lead to disaster – that’s who. As Eugene McCarthy said:

Being in politics is like being a football coach. You have to be smart enough to understand the game, and dumb enough to think it’s important.

It is hardly surprising that in an era when political parties are mere husks of the great national movements they once were, hollowed out by decades of contempt and neglect from on high, those who remain are the diehards, the fanatics, the obsessed and, occasionally, the insane. But since they are the only thing keeping our political parties from slipping their moorings altogether and floating free of any sort of anchoring in principle, beliefs or political creed, their stubborn and persistent existence – however grotesque and incomprehensible to the rest of us – is still on balance a good thing. If that means that occasionally we have to deal with swarms of hysterical cybernats or put up with the Fawltyesque ramblings of retired colonels, well, at least there is someone out there who still believes in something, however gibberingly daft it may be.

However, one issue that neither Chris or Mr E pick up on is the parallel problem of ‘organisational capture’, i.e. what us lefties used to refer to as ‘entryism‘.

In simple terms, it is not simply a matter of the decline in the mass membership of political parties, and other organisations, leaving them increasingly at the mercy of their residual ‘swivel-eyed’ activist rump. It also leaves them in a position where, starting at the grassroots level, they become increasingly susceptible to capture by organised minority interest groups intent on using the party/organisation as a vehicle to push their own narrow agenda.

Although this is problem that is, historically, most closely associated with the political left, and in the UK particular with the takeover of the Labour Party Young Socialists and Liverpool City Council by Militant, it is an issue that is increasingly coming to bedevil conservative politics, particularly in the United States. For example, one of the more alarming and poignant stories to emerge from the 2010 US election was that of Bob Inglis, a former Republican member of the US House of Representatives who was deselected in 2010 after losing a primary to Tea Party-backed candidate:

It was the middle of a tough primary contest, and Rep. Bob Inglis (R-S.C.) had convened a small meeting with donors who had contributed thousands of dollars to his previous campaigns. But this year, as Inglis faced a challenge from tea party-backed Republican candidates claiming Inglis wasn’t sufficiently conservative, these donors hadn’t ponied up. Inglis’ task: Get them back on the team. “They were upset with me,” Inglis recalls. “They are all Glenn Beck watchers.” About 90 minutes into the meeting, as he remembers it, “They say, ‘Bob, what don’t you get? Barack Obama is a socialist, communist Marxist who wants to destroy the American economy so he can take over as dictator. Health care is part of that. And he wants to open up the Mexican border and turn [the US] into a Muslim nation.'” Inglis didn’t know how to respond.

During his primary campaign, Inglis repeatedly encountered enraged conservatives whom he couldn’t—or wouldn’t—satisfy. Shortly before the runoff primary election, Inglis met with about a dozen tea party activists at the modest ranch-style home of one of them. Here’s what took place:

I sat down, and they said on the back of your Social Security card, there’s a number. That number indicates the bank that bought you when you were born based on a projection of your life’s earnings, and you are collateral. We are all collateral for the banks. I have this look like, “What the heck are you talking about?” I’m trying to hide that look and look clueless. I figured clueless was better than argumentative. So they said, “You don’t know this?! You are a member of Congress, and you don’t know this?!” And I said, “Please forgive me. I’m just ignorant of these things.” And then of course, it turned into something about the Federal Reserve and the Bilderbergers and all that stuff. And now you have the feeling of anti-Semitism here coming in, mixing in. Wow.

Now you might think that incidents like those described by Bob Inglis can safely be filed away under ‘only in America’, but don’t be so sure – at the very least, take a good hard look at the following chart which I’ve put together in an attempt to map the many connections that already exist between our own right-wing Christian lobby and both their US counterparts and, more importantly, with a wide range of British conservative political organisations and politicians.

The map is, at this stage, far from complete, particularly in terms of mapping connections to Conservative members of both the House of Commons and House of Lords – and there are also MPs in other parties who have similar links, but no so many as are evident amongst the Tories – but what it does show, even its current state, is the extent to which our own, home-grown, religious lobby has already forged connections and assumed positions of influence throughout the right-wing/conservative political movement in Britain and the extent to which political opposition to measures such as equal marriage and legal access to safe abortion services originates with and is tied into a very narrow range of closely connected and inter-related religious lobby groups with, in some cases, very clear connections back to the US religious right.

So here’s the map, which you can also download as a print quality PDF (1.0 Mb, A3 landscape) 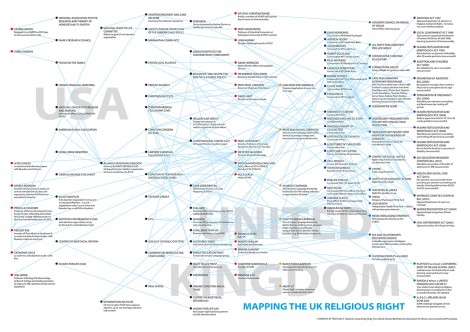 If you think that the religious right in Britain is no more than a bunch of fringe evangelical groups with few connections and very little political influence, this chart may well persuade you to think again.

One thought on “Marriage Equality, Conservative Politics and the Religious Right”