But having said that, I was, quite frankly, astounded by the things I read here:

“I will never initiate or support any attempts to legalise homosexuality”
– John Atta Mills, President of Ghana

Both of these countries have a form of democracy, although I suspect Uganda’s is more window-dressing than actual. But Ghana’s democracy is highly rated.

Being gay is still illegal in 80 of 196 countries across the world, being a lesbian is specifically outlawed in 45 – in 6 countries the penalty for both is death.

I don’t know how many democracies outlaw homosexuality, but I bet it’s a fair few:

All of which just goes to show that democracy can easily be used as a fig leaf for some really nasty aspects of human prejudice and really doesn’t deserve the endless veneration it attracts.

Now two two data points doth not an analysis make, so is there any way we can take a more comprehensive look at this issue?

To begin with there are democracies and then are ‘democracies’ or, to put it another way, what passes for a elected democracy in some countries can often look, in practice, much more like an elected dictatorship. So, in order to unpick this issue, the first thing we need is a means of assessing just exactly how democratic a country’s democracy genuinely is.

Thaddeus points to one possible avenue for making this assessment, Freedom House’s venerable Freedom in the World index, which ranks countries on two index measures; political rights and civil liberties.

As useful as this index is as a ready-reckoner, its scoring system (1-7 in half point increments for each metric) lacks just a bit too much granularity for my analytical tastes but, luckily, we have a new kid on the block in the form of the Economist Intelligent Unit’s Democracy Index (pdf), which was published for the first time in 2006 and biennially since.

This particular index assesses countries across five domains; electoral process and pluralism, functioning of government, political participation, political culture and civil liberties, on a 10-point scale with scores given to two decimal places. Although it is by no means peer reviewed, it does come from a well respected, objective and reliable source and it correlates very well with the Freedom House index (Pearson coefficient = 0.91 against five-year average scores from the Freedom in the World index).

Based on these scored, countries are ranked and assigned to one of four categories; full democracies, flawed democracies, hybrid regimes and authoritarian regimes – and there are no prizes for guessing that North Korea sits at the very bottom of the pile. As for Thaddeus’ two examples, Ghana ranks 77th in the world is a classified a flawed democracy when Uganda barely makes the top 100 (98th) and is classified as a hybrid regime.

So, that’s half the battle the won – the next question being how can we now compare this against the global picture for LGBT civil rights?

Sadly, there’s no pre-prepared global index of LGBT civil rights but the is a very useful Wikipedia entry, which is based on data taken from the ILGA’s annual report on state-sponsored homophobia and provides a pretty comprehensive overview of the global state of play. It’s not a numerical index, unfortunately, but it does provide sufficient information to tinker one together using some very simple rules. Countries get one point for each civil liberties measure fully in place, a half point if its in the legislative pipeline and there are fractional deductions for any measure that are not applied uniformly an a national basis or which are applied unequally, such as different ages of consent for heterosexuals and homosexuals. Where homosexuality is illegal, countries also lose points based on the maximum sentence that can be applied in prosecutions of consensual homosexual acts at a rate of one point deduction for every year, with a flat 40 point deduction if the maximum sentence is life imprisonment and an 80 deduction if the death penalty is in effect.

Okay, so this is hardly  a rigorous scientific exercise but for our purposes it does provide a means of ranking countries in terms of the degree to which their native LGBT communities are afforded basic civil rights in law and it does give a workable index which we can use to explore, in rather greater detail, the relationship between democracy and LGBT civil rights.

So we now have the two datasets we need, covering 165 nation states in total, giving us this comparison: 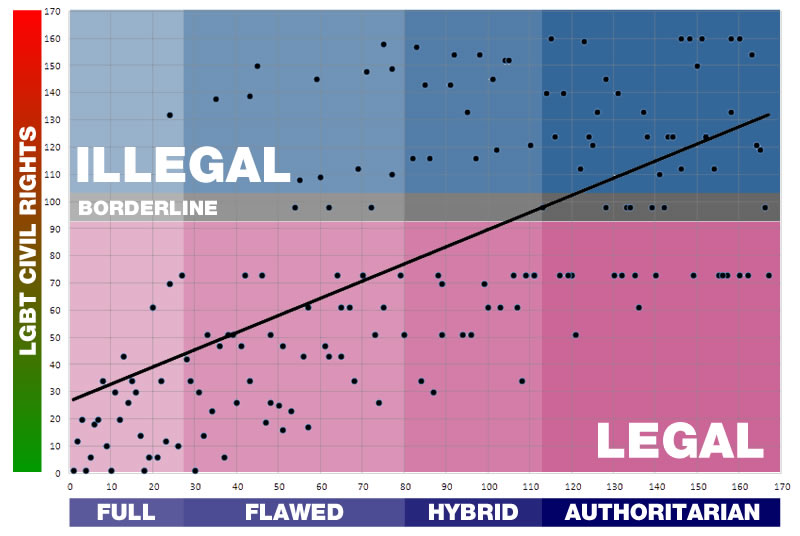 There is, it seems, a pretty clear relationship here – the correlation coefficient is 0.64 – and we have a very clear answer to Thaddeus’ poser – democracy is only a fig leaf for some of the nastier aspect of human prejudice if your working definition of a democracy is limited to ‘has some sort of elections’. There is more to democracy than just having an electoral process of some description and what is very noticeable here is that by far the best guarantor of LGBT civil liberties is, as you might well expect, a robust liberal democracy with all the trimmings; political pluralism, free and fair elections, civil rights enacted in law, press freedom, etc.

Of the 26 countries categorised as full democracies by the EIU, only one treats homosexuality as a criminal offence – Mauritius – with only two others lagging noticeably behind the rest; South Korea and Japan.

As for those countries in this dataset  in which homosexuality is treated as criminal offence (68), Africa remains the major blot on the global civil rights landscape (42), followed by the Middle East and Asia (21) and Central and South America, including the Caribbean (5), although this last figure would be considerably higher but for the exclusive of number of Caribbean island states from the dataset as these were not included in the EIU democracy index.

Sadly, there is very clear ethno-religious divide here, with African, African-Caribbean and Islamic states being by far the worst offenders and although local culture and history is likely have a significant part to play, I think this graph rather nicely illustrates one of the major causes of this divide: 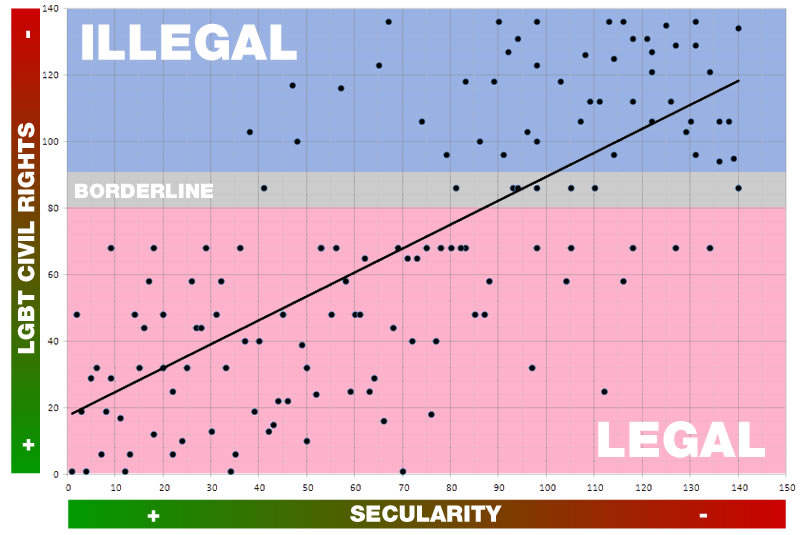 This time we’re looking at relationship between LGBT civil rights and the secularity/religiosity of different societies, based on data compiled by Gallup in 2009. We’re using a slightly smaller dataset (n=141) in which countries are ranked using a quick and dirty ‘secularity index’ derived from Gallup’s dataset by dividing the percentage of the population who consider religion to be important to their every day life by the percentage who see it as important. It’s a somewhat crude measure but nicely illustrative of the problem – religious homophobia – and again, the correlation is pretty strong (0.71). In fact, if you combine the Democracy and secularity index into a single index by adding them together and dividing by two, the correlation with the LGBT civil rights index becomes even stronger (0.78).

Religiosity goes firmly hand in hand with state-sponsored homophobia – who’d have thunk it – and as this next graph demonstrates, it not just LGBT rights that suffer in societies in which religion manages to gain the upper hand: 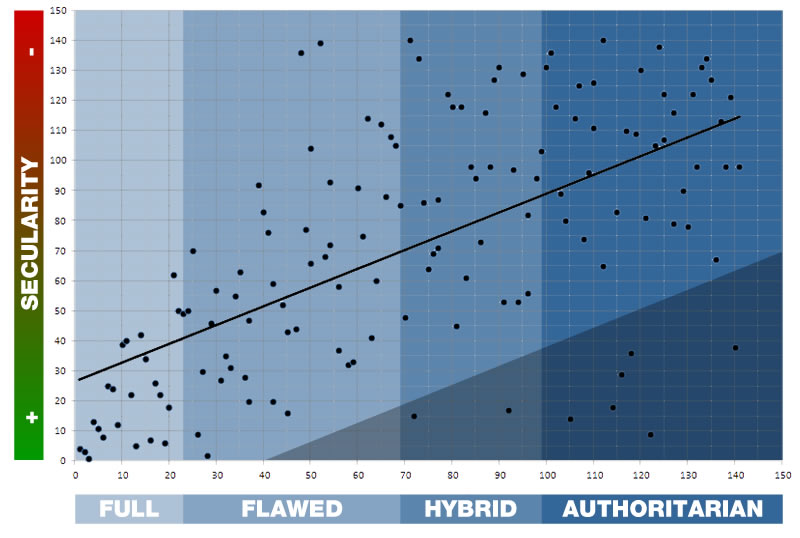 Again, there is a pretty string correlation between secularity and democracy and, of course, between religiosity and authoritarianism, even allowing for the small cluster of outliers in darker area towards the bottom-right of the graph, which you won’t be surprised to find includes Russia, Cuba, Vietnam and several states that were formerly a part of the Soviet Union. The correlation between secularity and democracy is, again, reasonably strong (0.62) and if we takes things a stage further by removing the lingering effects of communism, which arguably shares enough basic characteristics with religion to be considered a kind of non-theistic religion, then the correlation strengthens to 0.73.

So, the moral of the story is that if you’re after a fig leaf for some of the nastier aspects of human prejudice, then nothing comes close to a hefty dose of That Old Time Religion, but if its civil right and liberties and a robust, fully-functional democracy you’re after then its best to keep all the god-bothering to a minimum and at a safe distance from government.

If you’re how dear old Blighty is doing in all this then wonder no more.

On the EIU’s Democracy Index for 2010, the UK ranked 21st and was classified as a full democracy – in terms of individual domains, we did very well for our electoral process and political pluralism and for civil liberties, but were somewhat let down by the scores for the functioning of government and, in particular, political participation, where our low electoral turn-outs are rather hurting our overall score.

It’s also rather than the Greeks (30th), Italians (31st) and the French (33rd) all of of which were categorised as flawed democracies – Greece and Italy lost a fair bit of ground with a poor score for the functioning of government, leaving bears shitting in the woods all over Europe, while deficiencies in France’s political culture saw them take a considerable hit largely, one suspects, due to the impact that the country’s notoriously pernicious privacy laws have on press freedom.

On my own LGBT Civil Rights, the UK rolled in at a very pleasing 6th place, although we will, with any luck, be moving up to joint first with The Netherlands, Sweden, Norway, Spain and – believe it or not – South Africa, just as soon as the government gets around to legalising same-sex marriage.

And, so far as my quick and dirty assessment of secularity/religiosity goes, the UK is currently the 7th most secular nation on the planet, behind Sweden, Estonia, Norway, Denmark, Czech Republic and Japan, so that not bad going either.

In troubled times, its also nice to be reminded that, for all its flaws, the UK isn’t such a bad place to live after all.