GCSEs didn’t end segregation, they only concealed it.

News that Michael Gove reportedly intends to replace the current GCSE system with ‘tougher’ O-level style exams in a system in which ‘less academic’ students would sit a “different ‘more straightforward’ exam, like the old CSE” has rapidly spawned a debate on ‘segregation’ which looks, to me, like nothing much more than a bunch of bald men fighting over a toothless comb.

Regardless of the merits, or otherwise, of Gove’s plans, the simple fact is that GCSE’s did not end ‘segregation’ in the secondary examination system at all, they merely concealed the segregation away from plain sight.

Under the pre-GCSE system, students sat either GCE ‘O’ Level examinations, which were graded from A to E (plus U – unclassified – for abject failures) with Grade C considered to be a ‘pass’, or they sat CSE examinations, which were graded 1 to 5, with a Grade 1 being considered as being equivalent to an O-level pass at Grade C and Grade 4 being the “standard of performance expected of a candidate of average ability who has followed an appropriate course of study in the subject”.

There were also hybrid ’16+’ examinations in some subjects in which one could obtain a dual CSE/GCE O level grade, but unlike a ‘straight’ CSE one could gain an O level pass at grades A or B by taking the 16+ examination.

CSEs were introduced in 1965 to provide a nationallly recognised qualification for students at Secondary Modern schools, most of whom did not take O levels and, therefore, left school without any qualifications other than a school leavers’ certificate.

… or rather it didn’t – it gave students a single qualification to aim for but, below the surface, the GCSE system is split into two tiers; a Higher tier which is graded A*-E (plus U for unclassified) and a Foundation tier, in which students sit a ‘more straightforward’ exam, which is graded C-G (plus U).

The relationship between these two supposedly different examination systems is perhaps a little unclear when its written down but, fortunately, its one that lends itself well to visualisation of a kind which make this concealed relationship glaringly obvious: 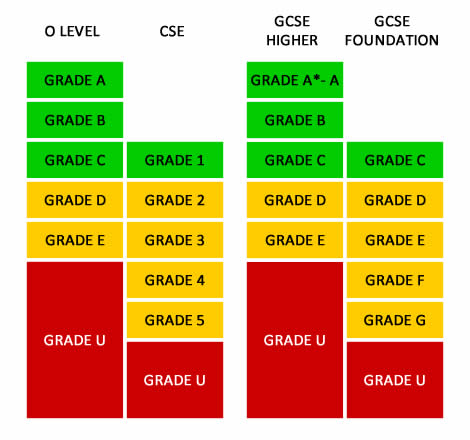 The idea that we actually have an unsegregated examination system is nothing more than a bureaucratic illusion, a bait and switch exercise which created a surface appearance of integration while retaining all the main characteristics of the previous system in its core structure.

If you genuinely believe that we have an unsegregated examination system for 16 year olds in England, then you’ve been conned and, equally, if you’re going to attack Gove’s proposals purely on the basis that it alleged reintroduces segregation into the examination system then you’ve completely failed to understand the real issues, which aren’t about segregation but about whether or not this, or any other government, can deliver a credible system of examinations and qualifications each of which is valued by students, parents and employers in their own right and not by reference to wholly artificial and often arbitrary notions of equivalence with other ‘academic’ qualifications.

That’s where the present system is, and has been, failing too many young people over the last thirty years and more – a ‘good’ qualification is one that is valued for what it actually is and not for being sort of like another, often very different, qualification. We need a system which breaks free from the tyranny of academic equivalence, especially is relation to vocational qualifications, and that’s the challenge that I’ve yet to Gove even attempt to tackle.

12 thoughts on “GCSEs didn’t end segregation, they only concealed it.”