You’ll have to forgive me for veering into Political Scrapbook territory but no soon as I heard that a number of MPs have been bypassing the new rules, which prevent them claiming mortgage payments on expenses, by renting their second homes to each other, I had the uncanny feeling that I’d seen this particular scam somewhere before.

And, after a couple of conversations with family members, it turns out that I was right.

Older visitors to the Ministry may well recall a late 80s sitcom called ‘Bread‘, which chronicled the heart-warming misadventures of a loveable Scouse-Catholic family of dole-cheats and chancers, the Boswell family. 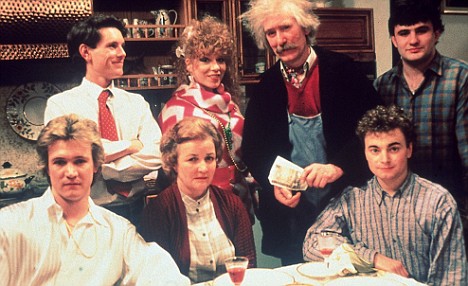 Written by the-then reigning queen of the Scouse sit-com, Carla Lane, the series ran for five years, from 1986 to 1991 and was, for a time, the most popular comedy series on British television.

Interestingly, for our purposes, the British Classic Comedy website gives the following description of the series:

Bread followed the day to day lives of the ‘willie’ Boswell family.  With no visible means of support here was a family who knew how to milk the system, they even lived in each other’s houses so one could charge the other rent . Each member has a distinct character different from the other.  The series produced some side splitting moments and great catchphrases, who can forget Nellie Boswell yelling “she is a tart” or the more relaxed Joey when visiting the DHSS “greetings !”

It goes without saying that the family’s rent was actually paid by the state through the housing benefit system, exploiting a loophole in the system which has long since been closed by Parliament.

Between MPs imitating the Boswell family to claim mortgage payments on expenses  and Grant ‘Michael Green’ Shapps’ online marketing shtick – ‘Next year, you’ll all be millionaires’ – the 80’s sit-com is rapidly turning into an unexpected source of inspiration for our current crop of Parliamentarian. So much so that one half expects there to be a break in the middle of this week’s PMQs to allow Motorhead to regale MPs with a blistering rendition of the ‘Ace of Spades’ from the Strangers’ Gallery.

So, next time an MP tells you that they’re a big fan of Boswell, don’t forget to ask them whether they mean Dr. James or Joey.