Not just the Met failing women.

I don’t know how much national press coverage this story will get but today’s Birmingham Mail is reporting another sorry case of a Police officer falling down on the job:

A “rogue” policeman has quit the West Midlands force after admitting retracting a domestic violence victim’s statement without her knowledge. PC Stuart Williams, 37, resigned after pleading guilty to forgery at Coventry Crown Court on Monday. He was charged after an investigation was carried out by the Independent Police Complaints Commission (IPCC). The cop had been due to stand trial over the charge but changed his plea to guilty at the start of the proceedings. He received a four-month suspended prison sentence and was ordered to pay £2,400 costs.

Yes, you are reading that correctly.

The officer in question was tasked with investigating a complaint of harassment against the woman’s ex-partner but instead of doing his job properly he chose, instead, to falsify paperwork to make it appear that he’d been investigating the case. Then, to cap it all off, he visited the victim in April 2011, wrote up a false statement withdrawing the complaint and forged the victim’s signature to make it appear that they had asked for the case to be dropped.

It is, of course, only a few months ago that Ryan Coleman-Farrow, a former detective constable with the Metropolitan Police, was jailed for 16 months for failing to investigate 10 rape cases and three sexual assaults and for falsifying records, including making entries on the police computer system which indicated that the Crown Prosecution Service had advised no further action in cases when no such instructions had been given.

The impact the Coleman-Farrow’s misconduct has had on women in London reaches far beyond the 13 cases that he failed to investigate and can be clearly seen in the Met’s own crime statistics. The earliest round of significant publicity given to this case and concerns relating to the conduct of officers in the Met’s specialist Sapphire unit, which deal with rape investigations, occurred in May 2012 with media interest peaking in September when Coleman-Farrow stood trial and entered guilty pleas to 13 counts of Misconduct in Public Office. Monthly statistics for the number of rapes reported to the Metropolitan Police are available from April 2011 to November 2012 and make for very interesting reading, especially when you compare the number of rapes reported from May to September 2012 with the same period in 2011. 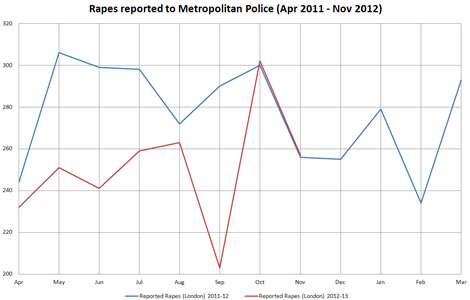 The blue line shows the monthly number of reported rapes in London for April 2011 – March 2012, while the red line shows the figures for April 2012 through to the following November and, well, there’s a very clear difference in the figures for the months of May to September. Overall, the number of rapes reported to the Metropolitan Police for that period of 2012 (1217) is just about 17% down on the same period in 2011 (1465) with the biggest fall (30%) occurring in September.

Now, much as I’d like to attribute that fall in the number of rapes reported to the police to an actual fall in the number of rapes, or even to a happy side-effect of an increased police presence on the streets of London due to the Queen’s Diamond Jubilee and the Olympic Games, the fact that it also coincides with the period during which there was adverse publicity being generated by the Coleman-Farrow case is not something I can overlook, especially as the biggest fall over the previous year occurs in the same month as the case went to trial, allowing the full details of Coleman-Farrow’s misconduct to be made public. Correlation isn’t proof of causation of course but in this case it looks really suspicious, enough to suggest that the likely cause of a sizeable proportion of the fall in reported rape cases during this period stems from a serious loss of confidence in police’s ability to investigate rape cases properly, particularly as the figures for October – the month following Coleman-Farrow’s conviction – appear to revert back to their usual trend.

The problem here is not simply that the perpetrators that Coleman-Farrow failed to investigate may well get away with the crimes but also that sizeable number of other rapes – and rapists – will not have been investigated in a timely fashion because their victims, during the period from May to September 2012, didn’t come forward for fear that their case would not receive a proper investigation. Rape convictions are difficult to secure at the best of times but one thing that can, and does, make a big difference to the odds of getting a conviction is physical evidence, evidence that could have been available to the police had but which may very well be lost forever by the time any women who were dissuaded from contacting the police by what they’d seen in press finally get around to contacting the Met, assuming Coleman-Farrow’s conviction is enough to persuade them that things have genuinely changed for the better.

There is far more at stake in these situations, where a serving police officer fails to carry out their duties, than just the direct impact this has on the women whose complaints aren’t fully or adequately investigated. It damages public confidence in the police which means fewer rapes, sexual assaults and domestic violence incidents getting reported to the police and more rapists and abusers getting away with their crimes and remaining free to rape and/or abuse other women.

This kind of thing has to stop.

One thought on “Not just the Met failing women.”