What the CPS aren’t telling you about Rape Convictions

According to the Crown Prosecution Service, rape convictions have hit an all -time high:

The statistics show that the conviction rate for rape prosecutions has continued to rise to the highest on record, from 58% in 2007/08 to 63% in 2012/13. CPS recorded data on rape prosecutions includes all cases initially charged and flagged as rape, including those cases where a conviction was obtained for alternative sexual offences or serious offences of homicide or offences against the person.

Ah, but have you noticed the caveat in paragraph 2?

In the parallel universe that bureaucrats inhabit a ‘rape conviction’ is not actually a conviction for rape, it includes any conviction is a case that was initially charged and flagged as a rape, even if the actual rape charge was dropped before the case reached court or the defendant was acquitted of rape but convicted on a lesser offence.

In short, however good the overall conviction rate in these case might now look on paper, the claim that rape convictions have hit an all-time high is bullshit, a point that I made back in March 2012 when they tried the same bullshit arguments.

Rather than do a detailed statistical analysis to prove my point, which in any case would have to be based on last year’s data as the data on which the CPS’s current ‘best year ever’ claim is based won’t be released until October, I’ve pulled together this [hopefully] hand infographic which lays out the truth about rape right through from the British Crime Survey estimates for the annual prevalence of rape and other serious sexual offences to the CPS’s own audited figures for case outcomes in prosecutions relating to cases initiated in 2009, which provides the most accurate current picture of actual CPS performance, and its well worth noting there that starting from a annual baseline of 85,000 completed or attempted serious sexual offences against adult women in England and Wales plus around 10,500 rapes in which the victim was a female child (i.e. under 16), the criminal justice system delivered just 802 actual rape convictions, i.e. where a defendant was actually convicted of rape and not a lesser offence, of which over half (415) came by way of a guilty plea and just over half were for offences against children.

In short, in that audited data, less than 400 actual convictions for rape related to offences in which the female victim was aged 16 or over.

So here’s the infographic which lays out the full – and very sorry – picture (click image to embiggen): 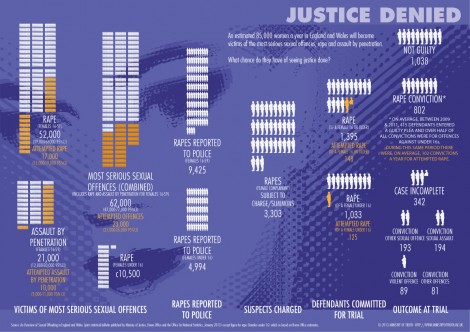 And, for anyone who wants one, here’s the same image as a high quality, ready to print, A3 poster format PDF file (warning large file – 6.2Mb) then you can download it from this link.

Oh, and as I’m feeling in particularly generous mood, copyright on this is by way of a creative commons licence but if any Women’s Aid, Rape Crisis or campaigning organisations want to run off a few copies with their own logo on it then I can either supply the poster in Adobe Illustrator format, for your own printer to work with, or drop your logo on it myself and provide you with a pre-flight package (Illustrator, InDesign and/or PDF) you can take directly to a commercial printer, saving on your artwork costs, all as a complete freebie.

So if any of that floats your boat, contact me by email or, preferably, via Twitter – we can exchange email addresses by DM and I’ll get a custom package sorted out for you in a couple of days. Copyright on the image is notionally under a creative commons non-commercial licence but I can also waive that if the poster’s being used for fund-raising purposes by a non-profit organisation.