Via the BBC I I’ve learned of a new health and safety measure that I fully expect to be doomed to be a dismal failure:

“Screaming” traffic cones are to be used on motorways across England to protect road crews.

The cones are fitted with an alarm that “will literally scream” when the cone is struck, the Highways Agency said.

The yellow-topped, “lighthouse” style wailers alert road workers to the danger of vehicles coming too close.

The agency said they will mainly be used on motorways, meaning students or other traditional cone nemeses are likely to be kept at bay.

The cones were unveiled by the agency near Perry Barr in Birmingham.

“We will only use them at certain localities, such as motorways or critical road works,” a spokesman said.

“We wouldn’t expect people to be able to get close to them.

This is one of those ideas that probably looks good on paper but which ignores a very obvious problem… human nature.

As you can see from the photograph (below) the new cones are easily identified by the bright yellow module on the top of the cone that houses the alarm unit and therein lies the problem. 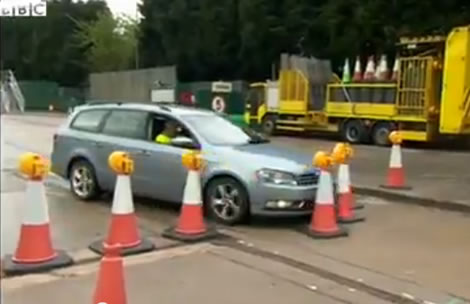 Within a very short space of time, no more than a few days I should imagine, it will become obvious to a certain type of driver that merely clipping one of these cones as you drive past will provoke a reaction from road maintenance workers. At the very least, most will stop whatever ever it is they’re doing and look around to see whether there is indeed a vehicle hurtling towards them while some – those of more nervous disposition – may very well just drop whatever they’re doing and bolt for cover.

And, of course, once these drivers realise just how easily they can put the wind up road maintenance workers by clipping a cone on the way past then it will quickly become a game, particularly on those occasions when people are driving through contraflow on the motorway only to spot workers standing around seemingly doing nothing.

You can see where this is heading…

…as long as the traffic is moving freely enough for it not to be immediately obvious which car clipped a cone, there will be driver who will find the prospect of scaring the living shit out of bunch of road maintenance workers completely irresistible. And so, before very long, you’ll find that motorways will be lined with hundreds of these ‘screaming’ traffic cones, all with the batteries disconnected by the maintenance crews in effort to prevent drivers making a complete pain of the arse of themselves, rendering them a complete – and no doubt expensive – failure.

For such is the law of unintended consequences.

In fact, I strongly suspect that you will be able to measure the maximum life span of these cones using your TV schedules – just keep an eye for the next new series of Top Gear because if the game hasn’t started in earnest by then it will surely kick off in the days immediately after these cones are featured on the news section of the show.