So, without wishing to waste time recapping events that are probably already familiar to most of my regular readers, the ongoing shitstorm of the wonderful Jesus and Mo cartoon strip started with this tweet by Maajid Nawaz: 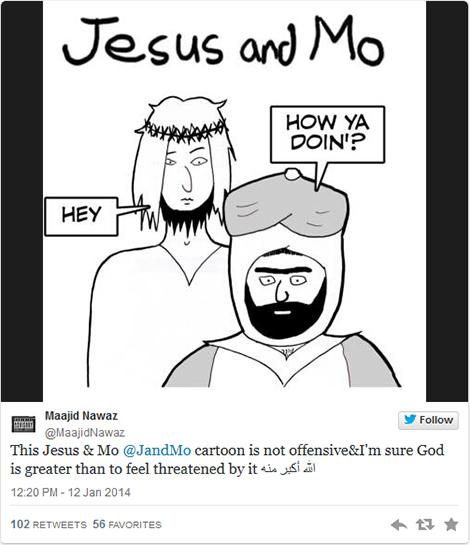 To me, it matters that you can see that for yourself. Channel 4 News, on the other hand, clearly doesn’t feel the same way so when it covered this story the image that was shown to the British public was this one: 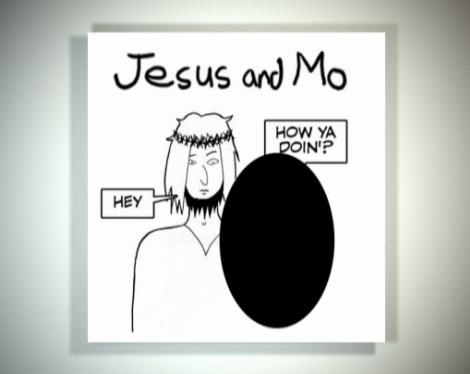 This is perhaps a small improvement on the BBC’s Newsnight programme, where they declined to show any kind of image of this ‘offending cartoon’, but as I’m not aware that the BBC has yet put out any kind of statement that either seeks to explain or justify its decision there is really not much I comment on at the moment.

Channel 4 News have been challenged to account for its action by the National Secular Society, which issued an open letter to the programme’s editor, to which it responded with the same, rather brief, standard letter it has issued to other complainants in which the key passage I personally want to focus on is this one:

The senior editorial team decided that the showing of the entire illustration, whilst likely to cause offence, was not integral to the story, and therefore took the decision to pixelate. Whilst we acknowledge your views, we believe that on balance this was the correct decision and as a rule, where we consider the likelihood of significant offence to our audience, we will attempt to mitigate against that.

As the NSS has rightly pointed out, the cartoon is not only integral to the story it is the story; but even beyond that Channel 4 News had just one job to do here, which was to present its viewers the facts they needed not only to make sense of the story but to form their own opinion of it and decide for themselves whether and to what extent, if any at all, the claim that this cartoon is offensive has any objective merits or basis in fact.

In a free and democratic society, that is the role we expect the news media to perform. It is the central argument on which the whole notion of press freedom, in its modern sense, rests. Channel 4 News is there to give us the facts and, we, the British public will then take a view on what we consider to be the truth.

The news media is not there to try and tell us the truth because if ever a TV news programme, newspaper or journalist claims to be telling us the truth the very first question we should ask ourselves is ‘And exactly whose truth is that?’. News journalists should never try dealing in the truth, just ask Kelvin MacKenzie.

If you cut through the bullshit, this is not a particularly complicated story:-

2. Here’s the opinion of the guy who says it isn’t offensive, and;

3. Here’s the opinion of the other guy who says it is.

4. Now make your own mind up who’s right.

That’s all the story needed but no, Channel 4 left out the single most important fact, the full image of cartoon itself.

In fact they did far worse than that because by censoring the cartoon and putting Mo behind a big black oval they will have left their viewers – at least those of them who didn’t think ‘ooh, I must look that cartoon up on the internet for myself and see what all the fuss about’ – with no alternative but to try and imagine what might be behind that big black oval that has so offended the guy who says he’s offended, leaving them at the same time with the clear impression that there may indeed be something in the cartoon that actually needs, or deserves, to be censored.

That act alone moved the goalposts on the story and handed the advantage to the guy who claims the image is offensive, because many people will think that if it isn’t offensive then Channel 4 would have no need to censor it in the first place.

Let me illustrate exactly how this works using two identical pap shots of a well-known comedian, Russell Brand – and you can decide for yourself how much of that last statement is either factual or truthful. 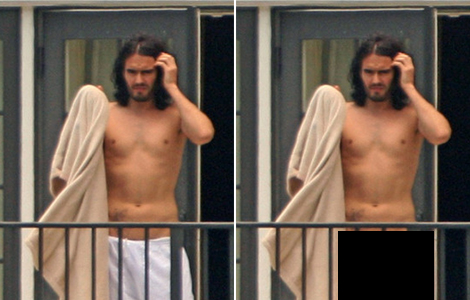 On the left we have an uncensored image of Russell Brand on a hotel balcony, the original caption to which indicated that at the time it was taken he either had done, or was maybe about to do, nothing more controversial or outrageous than a bit of yoga.

On the right we have the exact same image, which I have of course censored and were I to now tweet that image without comment then it’s highly likely, if not almost certain that someone, somewhere, would end up retweeting it with a comment to the effect of ‘here’s Russell Brand wandering around in public stark bollock naked’ because Brand’s personal reputation for indulging in what some consider to be outrageous public behaviour precedes him and there are, therefore, likely to be no great shortage of people out there who are perfectly prepared to believe that he has been photographed in public with his dick flapping in the wind*.

*And, if fact, he has been photographed in exactly that manner, on a hotel balcony, on another occasion, prior knowledge of which make the obvious assumption about censored version of this image even more plausible for at least as long as it takes for the uncensored version of the same image to circulate in response to the censored one.

All I have done here, of course, is use Photoshop to conceal a small portion of the original image behind a black rectangle, but if that image is viewed without sight or knowledge of the actual contents of the censored area, which shows of course that Brand has covered his usual immodesty with a towel, that very simple alteration to the photograph can, and will, completely alter the manner in which the image as a whole is perceived.

It is very easy to create a false impression and manipulate the public perception of an image by censoring it, whether you do that by making it obvious that you’ve blocked out or concealed part of the image or simply by cropping the image in way that omits details that are essential to gaining a full understanding of an image content, meaning and the circumstances in which it was taken.

This is such a basic idea that the manipulation of audience perceptions using nothing more than the selective cropping of an image is almost the first thing that students are taught about on just about any introductory media studies course; so ‘we didn’t think it would create that kind of impression’ or ‘the image doesn’t matter because the verbal description given in the report covers the issues adequately’ are not viable excuses here and a senior editor on a broadcast news programme should know that perfectly well – or they shouldn’t be in the job.

Channel 4 didn’t just capitulate here, they actively fucked Maajid Nawaz over for the sake of… what exactly?

Terry Sanderson, over at the NSS, suggests that Channel 4 took the Neville Chamberlain route because they’re ‘intimidated and afraid of the reaction from violent extremists’. Personally, I think that’s over-egging the pudding – it’s a nice line in rhetoric but I rather doubt that the thoughts uppermost in the mind of the editorial team at Channel 4 News had too much to with the potential inconvenience of using a mirror to check under your car before driving home or being chased down the street by a bearded South Asian guy with a suspicious looking rucksack.

Knowing how the media regulation operates in the broadcast sector, one of the ‘concerns’ that is likely to have been uppermost in the minds of the editorial team at Channel 4 News is the inevitability of Ofcom receiving a [carefully coordinated] shitload of near identical complaints from the guest with the severe case of butthurt and his buddies in the Society for the Prevention of Blasphemous Butthurt (Islamic Branch) if the uncensored cartoon were to appear on screen and just exactly what a pain in the arse it would be to have to field the paperwork for those complaints.

We live in a world where offensive thing happens all the time.

People are blown up by terrorists. People are tortured by the their own governments – or by someone else’s if you happen to be British. People starve, even though other people have so much food they throw most of it in the fucking bin. Women are raped and abused and even mutilated to prevent them deriving any kind of sexual pleasure. They’re denied things as basic as an education because some men think that’s what an imaginary omnipotent celestial entity wants according to their interpretation of a book written by other men more than a millennium ago. People die from diseases that other people haven’t seen in a generation and more. Some people still die, or are left with a permanent disability due to a disease [Poliomyelitis] that other people could eradicate completely if only the same bunch of fuckwits who object to educating women would shut the fuck up, get out of the way and just allow the people with their Polio vaccines to do their job.

The list of offensive things going on the world at any given moment is almost endless and many of those things are news, so just what the hell use to anyone is a news broadcaster that doesn’t want to offend people?

Most of the time, of course, news broadcasters don’t automatically shy away from the possibility of causing offence. Instead they work to manage people’s expectations, which is why you’ll often find yourself being told that ‘the next report contains images some people may find upsetting or disturbing’.

On British television, something very similar happens on near enough every Saturday night from the middle of August through to the middle of May: “Viewers who don’t want to know the scores in today’s Premiership games should look away now”. Some sports fans like to watch the day’s highlights without knowing the results in advance and get terribly offended if those results are put on screen without any advance warning. It’s spoils their enjoyment of Match of the Day and the BBC, on which the programme appears, knows this. It is, in fact, such an ingrained part of British culture that an entire episode of the 1970s British sit-com ‘Whatever Happened To The Likely Lads’ was built on the idea of the show’s two central characters trying to avoid learning the result of an England international match before they could sit down to watch the highlights on TV, the punchline being that…

Are we expected to believe here that it was beyond the collective wits of Channel 4 News for them to adopt a similar approach to managing their viewers’ expectations and sensitivities in this case or could there be, perhaps, other considerations that came into play, not least the possibility that many of their viewers might react to the cartoon, and indeed the entire story, by wondering if it was even news at all, let alone a story that required any kind of warning that it might cause offence to be issued in advance.

The senior editorial team at Channel 4 News shouldn’t be trying to excuse it’s behaviour here with spurious appeals to the “likelihood of [causing] significant offence to our audience”, they should be hanging their heads in shame because they had one job to do here, just one job – show the damn cartoon – and they blew it, as a result of which they betrayed Maajid Nawaz, the anonymous author of Jesus and Mo, their entire audience and, of course, themselves.