The Mail on Sunday and Oral Contraceptives

A couple of days ago the Director of the Hacked Off campaign group, Brian Cathcart, published an article on the Huffington Post containing a table of figures that the Press Complaints Commission would much prefer that the public didn’t see, one which shows which newspapers attracted the most PCC complaints in 2013.

The top five newspapers on that list runs as follows:

The Mail on Sunday, of course, publishes only one edition per week compared to the six per week published by the four newspapers ahead of it in the PCC’s chart of shame.  Its 168 complaints last year are the equivalent of just over 1,000 complaints to a daily newspaper putting it firmly into second place in terms of the average number of complaint per issue and the Daily Mail Group well ahead of any of its rivals when it comes to attracting the ire of the public; and to understand why you only need to look at today’s front page (WARNING, link to Mail website so take appropriate precautions, e.g. have a bath ready for afterwards): 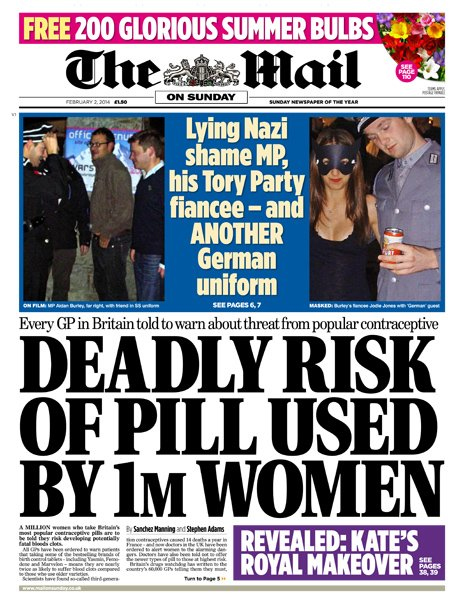 Evidently, someone at the Daily Mail Group has become so disturbed by the recent downward trends in the numbers of teenage conceptions, unwanted pregnancies, abortion, etc. that they’ve decided to take action and do something about it – and trust me, I am only being slightly sarcastic here because there is very clear evidence of a link between media-driven health scares relating to oral contraceptives and increases in teenage conceptions and unwanted pregnancies: 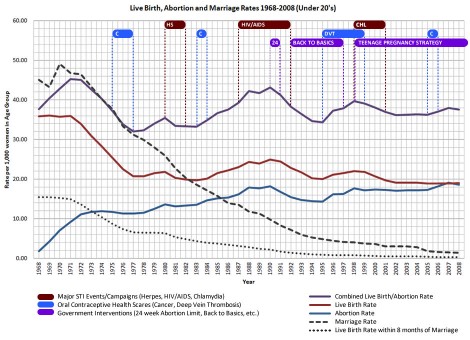 To be clear, The Mail on Sunday’s reporting here is the very worst kind of irresponsible journalism, the kind that unnecessarily stirs up public fears and anxieties in a manner that we already know has direct consequences. Some women will stop taking the pill as a result of what they read today, or simply because of what they see on the front of the newspaper while they are in their local newsagents or supermarket and this will result in an increase in unwanted pregnancies. It is a well documented phenomenon that happens every time the press pulls this kind of stunt.

So, with that firmly in mind, let’s walk through the Mail’s article and tell you the truth about their latest scare story:

A million women who take Britain’s most popular contraceptive pills are to be told they risk developing potentially fatal bloods clots.

All GPs have been ordered to warn patients that taking some of the bestselling brands of birth control tablets – including Yasmin, Femodene and Marvelon – means they are nearly twice as likely to suffer blood clots compared to those who use older varieties.

The first thing to understand here is that this is NOT a new story at all.

The press releases from the European Medicines Agency and the UK’s Medicines and Healthcare Products Regulatory Agency containing this new guidance to GPs were both issued on 22 NOVEMBER 2013, so this is a story that has been sitting around in someone’s ‘to do’ tray at the Mail on Sunday for a little over TWO MONTHS waiting for a Sunday when the newspaper has nothing better to put on its front page.

The second very important thing to understand is that there is no new evidence or new research behind this guidance. What the European Medicines Agency has done is carry out a detailed review of the existing evidence to confirm what scientists and doctors were already pretty confident they knew from that same research, that there is a small but elevated risk of venous thromboembolism (blood clots in veins) associated with the use of a number of third generation oral contraceptives.

So what exactly is this risk?

Well, for women not using any kind of hormonal contraception and who are also not pregnant the annual risk of venous thromboembolism (VTE) is around 2 in 10,000 women.

*If this seems a bit of an ‘in your face’ way of putting it so be it – these are comparisons that I believe women can readily relate to and help to illustrate the actual level of risk, something the Mail on Sunday fails to do.

Scientists have found so-called third-generation contraceptives caused 14 deaths a year in France – and now doctors in the UK have been ordered to alert women to the alarming dangers.

And if we take the Mail on Sunday’s claim that around 1 million British women are using these same contraceptives at face value then, using the EMA figures, we should expect to see between 60 and 120 cases of VTE a year linked to their use which could result between 2 and 4 deaths annually, which something under one twenty-fifth to one fiftieth of the number of women who are killed every year in the UK by their partner or husband.

Statistically speaking, using any third generation contraceptive is a far less risky activity for women than having a boyfriend or getting married.

Oddly enough, I can’t recall the Mail on Sunday ever devoting it’s front page to an exposé of the ‘deadly’ risks of pregnancy.

To be clear this is old news, even if the Mail on Sunday is trying to dress it up as something new by referring to the fact letters containing the new guidance from the MHRA have been issued within the last 10 days or so. The proof of this – and the degree of casual dishonesty that Mail on Sunday has applied to this entire story – is to be found right at the end of the article (as always) where the Mail states that:

Dr Sarah Branch of the MHRA said yesterday:  ‘Women should continue to take their contraceptive pill.

These are very safe, highly effective medicines for preventing unintended pregnancy and the benefits associated with their use far outweigh the risk of blood clots.’

No she didn’t. Dr Sarah Branch actually said that more than two months ago in the MHRA’s original press statement and the newspaper, of course, omits to mention the rest of what she had to say, back in November:

“Women should continue to take their contraceptive pill. These are very safe, highly effective medicines for preventing unintended pregnancy and the benefits associated with their use far outweigh the risk of blood clots in veins or arteries.

“No important new evidence has emerged – this review simply confirms what we already know, that the risk of blood clots with all combined hormonal contraceptives is small.

“If women have questions, they should discuss them with their GP or contraceptive provider at their next routine appointment but should keep taking their contraceptive until they have done so.”

Always remember, the Daily Mail and Mail on Sunday do not care about yours, mine or anyone else’s health, they care only about selling newspapers and it that means printing misleading information and creating unnecessary fear and anxiety – which is it invariably does – then that it what it will happily do.

Don’t just take my word for it, and certainly don’t take the Mail on Sunday’s word for anything – if you are at all concerned by anything you have read here then go and see your GP or contact your local Brook Advisory Centre or whichever other organisation you might have locally that can give you accurate contraceptive advice.

One thought on “The Mail on Sunday and Oral Contraceptives”