Let’s keep this simple and cut through the bullshit with a few facts that some people seen very keen to overlook.

FACT – The police officer, PC Toby Rowland, to whom Andrew Mitchell MP briefly spoke at the gates of Downing Street on the evening of 19 September 2012 has not been convicted of any criminal offence in relation to this incident.

FACT – The police officer, PC Toby Rowland, to whom Andrew Mitchell MP briefly spoke at the gates of Downing Street on the evening of 19 September 2012 has not been charged with any criminal offence in relation to this incident.

FACT – The police officer, PC Toby Rowland, to whom Andrew Mitchell MP briefly spoke at the gates of Downing Street on the evening of 19 September 2012 does not face any internal disciplinary proceedings in relation to this incident.

FACT – The official police log of this incident, in which it is alleged that Andrew Mitchell referred to the PC Toby Rowland and other police officers on duty that evening as ‘fucking plebs’ was filed by PC Rowland, who was the only officer at the scene who actually heard what Andrew Mitchell MP said.

FACT – What was actually said during that brief conversation was and is still a matter of dispute between Andrew Mitchell MP and PC Toby Rowland, both of whom claim to giving a factual account of the incident. That dispute has not been resolved, as yet, in favour of either party.

FACT – Andrew Mitchell MP has not been fully exonerated of the allegation that he referred to police officers as ‘fucking plebs’. The allegation, which was made by PC Toby Rowland, still stands and has not been refuted. A police officer who was not at the scene during the incident has been convicted of an offence of misconduct in public office and sentenced to 12 months imprisonment for false claiming to have been present in an email sent to his own MP. A number of other police officers also face internal disciplinary proceedings relating to the circumstances under which a copy of the official police log of the incident was leaked to The Sun newspaper, but PC Toby Rowland is not amongst those officers.

FACT – When Ed Miliband raised the matter of the allegation against Andrew Mitchell MP in the House of Commons, during PMQs on 17 October 2012, he referred only to the contents of the official police log. This is confirmed both by Hansard:

Edward Miliband: This is what the Mayor of London, the Prime Minister’s new best mate, said last year at the Conservative party conference:

“I reckon we need to…make it clear that if people swear at the police then they must expect to be arrested.”—[Interruption.]

The Chief Whip from a sedentary position says that he did not. Maybe he will tell us what he actually did say, which he has failed to do.

Yet according to the official police report,

“a man claiming to be the Chief Whip”

called the police “plebs”, told them they should know their place and used other abusive language. Can the Prime Minister now tell us: did the Chief Whip use those words?

Mr Speaker: Order. I said a moment ago that the Leader of the Opposition must and would be heard. The same goes for the Prime Minister. He must and will be heard.

The Prime Minister: What the Chief Whip did and said was wrong, and that is why it is important that he apologised, and apologised properly. That apology has been accepted by the officer concerned, and it has been accepted by the head of the Metropolitan police. That is why this Government will get on with the big issues of helping Britain compete and succeed in the world.

If a yob in a city centre on a Saturday night abused a police officer, ranting and raving, the chances are that they would be arrested and placed in the back of a police van, and rightly so. The Prime Minister would be the first in the queue to say that it was right. But while it is a night in the cell for the yobs, it is a night at the Carlton club for the Chief Whip. Is that not the clearest case there could be of total double standards?

Edward Miliband: Here is the most extraordinary thing: the Government say that I practise class war, and they go around calling people plebs. Can you believe it? I have to say, it is good to see the Cabinet in their place supporting the Chief Whip in public, but from the newspapers, what are they saying in private? That he is “completely undermined” and that his position is untenable. In other words, he’s toast. That is the reality. Here is the truth about this Government: while everybody else loses their jobs, the Chief Whip keeps his. If you are a millionaire you get a tax cut, if you are everybody else you get a tax rise. [Interruption.]

Mr Speaker: Order. Mr Kawczynski, I am very worried about your health. You are shouting in a bizarre manner. Calm yourself, man, and get a grip.

Edward Miliband: Maybe he will tell us whether he is getting the tax cut.

And by this video of PMQs for that same day:

Likewise, the web page that the Labour Party inviting visitors to their site to call on Mitchell to ‘come clean’ over the incident also refers only to the official police report, as filed by PC Toby Rowland. 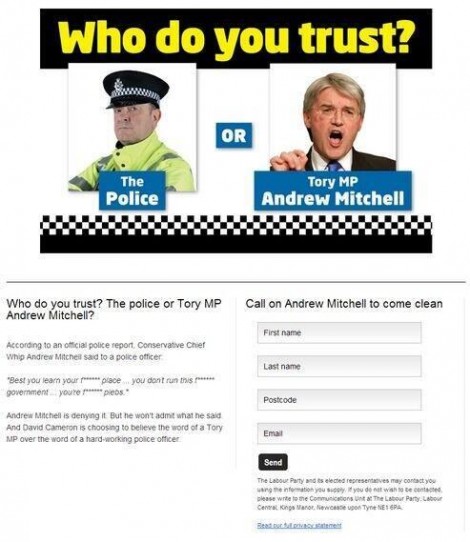 So, anyone who thinks Andrew Mitchell MP has been fully exonerated of calling police officers ‘fucking plebs’ or that Ed Miliband and/or the Labour Party has any reason to apologise, just hasn’t been paying attention to the facts.

2 thoughts on “Plebgate, Ed Miliband and A few inconvenient facts”