The Telegraph’s sting operation on a small number of abortion clinics has, of course, provoked the usual frenzy of overblown commentary from Nadine Dorries and her anti-abortion buddies, including an article at ConHome by the Delusional Member for Mid-Narnia which nicely illustrates the rather casual nature of her relationship with reality.

When agreeing to an abortion two doctors have to sign a statutory document to comply with the wording of the Act, ‘in good faith’. Some would argue that on that basis, almost every abortion which takes place in the UK is illegal. Do doctors really believe ‘in good faith’ that every abortion they carry out meets the criteria of the Act and more importantly, complete statutory documents to that effect?

Dorries ‘some’ in this case includes Dr Peter Saunders of the Christian Medical Fellowship and others in the anti-abortion lobby who cling religiously to the wording of the 1967 Act in the vain and wholly mistaken belief that the public is wholly ignorant of the fact that the law, in this case, is a complete and utter ass.

Does anyone in the UK not realise that the wording of ground C, which Dorries quotes above, is nothing more than a legislative fiction; a medico-legal compromise that was necessary in its day to get the Abortion Act through Parliament in the face of concerted opposition but which, otherwise, became obsolete within a few years, if not a few months, of the Act coming into effect?

Does anyone genuinely not understand that the ‘risk’ that doctors take in account when signing off on abortions is almost entirely notional, something that women and doctors are forced to play along with for the sake of being seen to comply with the law but which, otherwise, has little or no bearing on the actual reasons why women choose to terminate a pregnancy?

The truth is that we don’t really know, although when I say ‘we’ what I mean is ‘Joe Public’. The women who make these decisions know perfectly well why they make choices that they do but the fact remains that its getting on for 45 years since the Abortion Act passed into law and in that time there has not been one single substantive piece of detailed research conducted in the UK which addresses the question of why women choose to have abortions.

Now, regardless of your feeling about abortion itself, most people would agree that 190,000 abortions a year is rather too many. Its a little over 1 in 5 of all pregnancies that don’t end in a miscarriage and that’s a hell of a lot of unwanted pregnancies, and so most people would consider a reduction in the annual number of abortions to be a good thing, not least for the women who didn’t find themselves in a position where they needed to have an abortion.

All things being equal, a sustained reduction in the abortion rate would be a good thing but the $64,000 question here is that of exactly how to go about securing such a reduction, and I think most reasonable people would agree that in order to figure out how best to reduce the annual number of abortions pretty much the first thing you need to understand is why it is that so many women are choosing to have an abortion, as this will also tell you why so many pregnancies are unwanted.

That certainly makes sense to me, and if it makes sense to you too then welcome to the world of evidence-based policy making, a world in which you look for evidence to help understand why certain things happen in order to help you figure out the best way to do something about it.

But getting back to the main point, abortion has been legal in the UK for almost 45 years and yet, in all that time, there has been no detailed research carried out in the country that can help us to understand why so many pregnancies end in an abortion, and in the circumstances you really have to wonder why that’s the case.

The answer, of course, is that the law actually gets in the way because it insists that all abortion must be justified in purely medico-legal terms, terms which really tell us almost nothing about the reasons why the overwhelming majority of abortions take place, and this actively discourages researchers from asking important questions like ‘what are the actual reasons that influence women who choose to have an abortion rather than carry a pregnancy to term?’ because most of these actual reasons don’t fit easily, or even at all, into the medico-legal framework of the Abortion Act 1967.

It’s a dumb situation to be in but one which suits some people, particularly the anti-abortion lobby, because the absence of reliable information about the real reasons why women choose to have abortions leave them free to make up their own ‘facts’ and claim that women are using abortion as a form of contraception, or imply that most women who choose to have an abortion are feckless and irresponsible, or that they’re pressured in having abortions, against their wishes and best interests, by their partners or members of their family, or that they’ve using abortion as a means of choosing the sex of the babies they do carry to term.

And they can get away with this kind of thing – or so they think – because the law in this country effective prevents researchers from carrying out the kind of research that would actually give us some genuine facts to work with.

Fortunately, for our purposes here, abortion laws in other countries don’t present the same kinds of barriers and, as a result, we can get some idea of the actual reasons why women choose to have abortions by looking at research conducted in the United States, specifically a paper by Finer et al. called “Reasons U.S. Women Have Abortions: Quantitative and Qualitative Perspectives” which is based on the results of a structured survey of 1,209 abortion patients at 11 large providers and in-depth interviews with 38 women at 4 sites, this being the qualitative component of the study.

This first table we’ll look at gives the most important reason that women identified as influencing their decision to have an abortion. 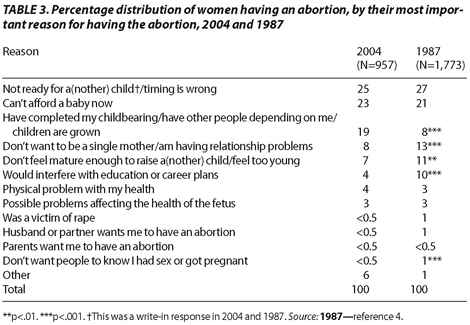 Now, I don’t know about you, but I’m struggling to see anything on that list that suggests fecklessness or irresponsibility, let alone anything that supports the idea that women are choosing to have abortions as a matter of convenience or as just another form of contraception.

Health risks are only the most significant factor in the thinking of seven per cent of the women involved in this study which would, I suppose, lead Dorries and her anti-abortion backers to argue that the other 93% of abortions – or maybe 92.5% if we allow for rape victims as well – would be legal in the UK.

Most people – certainly many more than would be inclined to support Dorries’ actual position on abortion were she ever to express it honestly – would take the view that regardless of the what the law might actually say, its perfectly reasonable for women to choose to terminate a pregnancy if they can’t afford to provide adequately for a child, either financially or emotionally, or where they cannot provide a child with a stable family environment, or even where it would have an adverse impact on the woman’s educational or career prospects.

As interesting as this table is, you only get a proper picture of the kind of complex decision making process that many, if not most, women go though when deciding to have a abortion when you look at the table which shows all the factors that women in this study identified as having influenced their decision. 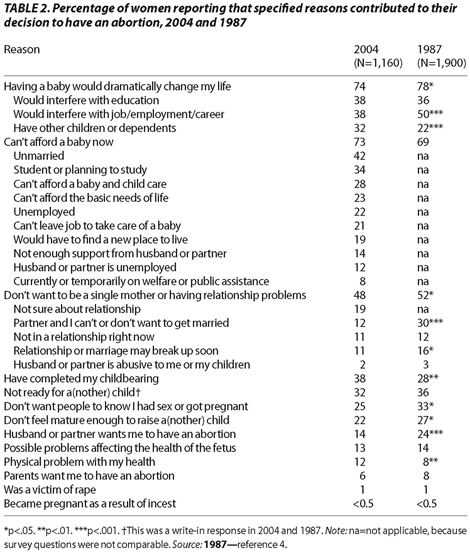 Now we’re getting to the meat of the issues.

Almost 3/4 of women gave ‘can’t afford a baby now’ as a reason for choosing to have a termination, with the specific reasons underpinning that choice ranging from simply being unmarried, through poverty and unemployment and a lack of support from their partner. 43% cited some sort of relationship issue(s) as influencing their decision. 38% had fallen pregnant after deciding that they didn’t want any more children and 32% felt that the wouldn’t be able to cope adequately with a(nother) child due to their existing responsibilities towards their existing children or other dependants.

Little wonder, then, that Finer arrived at the following conclusion…

A crosscutting theme [in the study] was women’s responsibility to children and other dependents, as well as considerations about children they may have in the future. Most women in every age, parity, relationship, racial, income and education category cited concern for or responsibility to other individuals as a factor in their decision to have an abortion. In contrast to the perception (voiced by politicians and laypeople across the ideological spectrum) that women who choose abortion for reasons other than rape, incest and life endangerment do so for “convenience,” our data suggest that after carefully assessing their individual situations, women base their decisions largely on their ability to maintain economic stability and to care for the children they already have.

In light of the public debate over the morality of abortion, it is notable that the women in our survey emphasized their conscious examination of the moral aspects of their decisions. Although some described abortion as sinful and wrong, many of those same women, and others, described the indiscriminate bearing of children as a sin, and their abortion as “the right thing” and “a responsible choice.” Respondents often acknowledged the complexity of the decision, and described an intense and difficult process of deciding to have an abortion, which took into account the moral weight of their responsibilities to their families, themselves and children they might have in the future.

Although British women would, I suspect, be much less likely to address the moral dimensions of their choices in terms of ‘sin’ than their American counterparts, questions of ‘right’ and ‘wrong’ and notions of personal responsibility and responsibility to others are no less likely to be major factors in the decision making process that many, if not most, women undertake when deciding whether or not to terminate a pregnancy.

Contrary to the impression that the anti-abortion lobby would like the create, the evidence shows that the decision to terminate a pregnancy is very much a moral choice and that, in turn, accounts for much of the abject dishonesty that is entirely characteristic of anti-abortion campaigns in the US and in this country. Dorries and her backers routinely resort to lies, distortions, misrepresentation, bullshit, dissembling and outright smears because, deep down, the know that they can no more win the moral argument on abortion than they can the scientific arguments that too often dominate abortion debates within parliament to the exclusion of those who’s views matter most, those of the women who have or who may, in future, be faced with making these choices.

In all this, I would agree with Nadine Dorries on one thing; the 1967 Abortion Act is poorly drafted, although not for any of the reasons she gives in her article at ConHome. It’s poorly drafted not because it fails afford doctors adequate protection against prosecution but because it fails, entirely, to reflect real life and the real reasons why women choose to have an abortion. Reform of the Act is needed but, sadly, the one thing we can be absolutely certain of in all this is that the kind of reforms that are needed, and that would put the UK’s abortion laws on the same footing as reality, are also the kind of reforms that Nadine Dorries would do everything possible to oppose.

10 thoughts on “The Dorries Delusion”