Okay, so let’s get quickly back on to the subject of the Premier League’s TV rights deal and the manner in which the money is distributed to the League’s 20 clubs.

As I pointed out in my last post pretty much the first that stood out from the league’s recently published figures was that the split in the three pots of money derived from the domestic rights, which covers a guaranteed payment to each club plus variable payments based on final league position and the number of live TV games in which individual clubs are featured, isn’t 50/25/25, as the league claims, but more along the lines of 46/27/27, which means a lower guaranteed payment to each club but increased payments in prize money and TV appearances, all of which would tend to push more money to the Premier League’s Big Five – Manchester United, Manchester City, Chelsea, Arsenal and Liverpool – at the expense of smaller clubs, such as Stoke, West Brom and newly promoted teams like Leicester and Burnley.

This is the table that the Premier League put out showing its figures for the 2014/15 season. 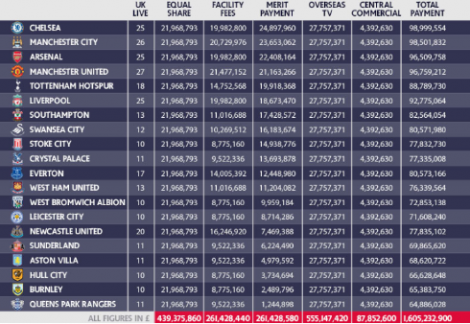 And here’s one that I put together, using those figures and bit of basic maths, to show how those payments would differ had the money from the sale of domestic TV rights been split in the manner the league claims – i.e. 50% to the guaranteed equal payment pot and 25% each to the “facility fee” for live TV games and the “merit payment” for final league position, compared to the actual split this year in which just under 46% of the cash went to the equal payment, with just over 27% going to each of the other two pots.

What you’ll see is that, just by the league having quietly moved the goalposts on the payment split, the top six teams in 2014/15, which were the Big Five plus Spurs, pocketed an extra £7.2 million from the total TV rights deal, all at the expense of the league’s smaller clubs.

Okay, so some of you might well be thinking “so what?”

Football is a rich sport so is it really such a big deal if a club like Manchester United gets an extra £1.5 million or one like Burnley loses out on close to £1.2 million just because the TV money wasn’t distributed in the exact manner that the Premier League claimed it would be?

Well, for Manchester United probably not, but when you come down to the level of the smaller but still fairly well established Premier League clubs like Stoke and West Brom and especially when you come to clubs like Burnley, Leicester and Hull, who are either new to the division or still working on trying to establish themselves in the top flight, then you’re looking at clubs where their annual gate receipts through the turnstiles are likely to be well under £1o million a year and in some cases maybe closer to £5-6 million a year, all of which makes the extra cash they would have picked up from a 50/25/25 split the equivalent of anything from one to four extra home games a season – and all without the expense of actually having to put on a game.

So yes, losing out on anything from £500,000 to £1.25 million over a season just because the Premier League has shifted the goalposts on its TV payments is a big deal, especially for one of the next’s season’s promoted clubs, Bournemouth, whose ground currently has a maximum capacity of just 11,700.