In its most recent update on the DWP’s heavily criticised Universal Jobmatch service, the Public and Commercial Services Union revealed that, under current regulations, Jobcentre Plus cannot force job seekers to sign up to this service by issuing a Jobseeker Direction:

Jobseeker Directions and Mandatory Use of UJ

PCS was aware that, despite assurances otherwise from the UJ project of DWP, management in some jobcentre districts were instructing advisers to tell claimants that UJ is mandatory and access must given to the DWP.

As a result of legal challenges and negative press attention, DWP have revised the guidance on UJ to make it clear that this cannot be done. The UJ Jobmatch toolkit chapter 3, paragraph 50, states: “You cannot issue a Jobseeker’s Direction to either require a claimant to create a profile and CV in Universal Jobmatch or to mandate a claimant to give us access to their account – this is their decision not ours.” Paragraph 52 also states that “We cannot specify to a JSA claimant how they provide us with records of their jobsearch activity and Universal Jobmatch will not change this.”

PCS is awaiting clarification from DWP management on the status of the many Jobseeker Directions that were incorrectly issued to claimants before the guidance was clarified. PCS members should contact their local representative to challenge any instruction to inform claimants that the use of UJ or access to it is mandatory.

However, in the last few hours, the Ministry has been provided with clear evidence that this guidance may be being ignored by some Jobcentres, with claimants being directed to sign up to Universal Jobmatch or risk losing their benefit for a minimum of four weeks.

The letter we’ve obtained was issued on 21 February 2013 during a scheduled interview with Jobcentre adviser, with the claimant being told that that new rules had come into effect on 18 February and that signing up to Universal Jobmatch was now mandatory. The letter also instructs the claimant to attend a second interview with their adviser, set for this week, and ‘present their details’ to their adviser as proof that they’ve signed up to the system.

As yet, more than a week on from the date on which this supposed new guidance came into effect, we’ve seen nothing from PCS to indicate that any new guidance or regulations have been issued to its members, which seems just a little suspicious.

The system has also been criticised for its lax security. It’s privacy policy states that it will try to restrict access to its CV database to authorised user but cannot offer any guarantees before going on to suggest that users avoid including any sensitive personal information in their CV, such as their racial/ethic origin, political or philosophical/religious beliefs, sexual orientation, past criminal convictions or any national identity number, ie a passport, driving licence or national insurance number. This section of the policy concludes with a far from reassuring disclaimer:

Charming… and sure enough, a Channel 4 investigation in December 2012 found that hackers were able to scam the system and quickly harvest personal information from desperate jobseekers just by posting a plausible looking fake advert. From the description given by Channel 4, I’d be hard pressed to call this a hack. It looks much more like a straightforward phishing scam and even if DWP/Monster do tighten up their checks on advertisers, it’s not all difficult to see how a determined fraudster who was willing to drop a few quid on renting a cheap office and a phone line might easily work the system and walk away with a lot of personal information in a very short space of time.

Anyway, back to the letter and I should note the claimant who supplied it has asked that we redact any information contained in tit that could be used to identify them, including the details of the Jobcentre they attend and the date/time of their second interview. We are, of course, only too happy to comply. 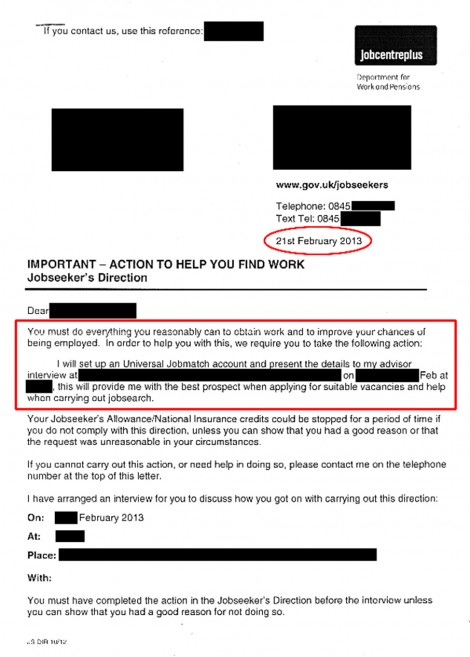 Until it can be confirmed as to whether either the regulations or DWP guidance on Universal Jobmatch has been altered, the best source of information on job seeker’s rights in relation to Universal Jobmatch is still this one, and if you do get handed a direction then I’d suggest you query it and ask to see the updated information in the Universal Jobsearch Jobmatch Toolkit, if that information even exists.